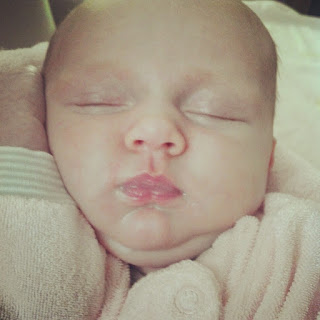 Today's topic is all about Haddie's food and the processes that come with it. We gave nursing a good run. But in the end, it wasn't working out for the best, for either of us. So, I broke out the pump. Exclusively pumping is a job in itself. I know I had visions of sitting down and pumping out about eight ounces in no time and going on about my day. Well, that isn't exactly how it works. There are some logistics involved.

The ease of on-demand feeding no longer exists. If you haven't planned ahead, you will have a screaming baby for twenty minutes while you pump and hope that you get enough. I had pumped a few times while we were still nursing and already had a small supply built up. I never knew there was such a science to the supply of breastmilk. It really is amazing how the body works. After a few weeks, your body adjusts to the amount of breastmilk needed. That is why consistency in pumping is so important. Since baby is not actually putting in the order, you have to maintain the supply by pumping regularly. This can feel like a full-time job itself. It is recommended to try to get at least eight sessions a day, but ten to twelve is better.

Do I feel like a dairy cow? Yes. Is it worth it? Yes. Not only is Haddie getting specially made food just for her, but Momma is saving money! Score. Another amazing characteristic of breastmilk is how it can be stored. Freshly pumped breastmilk can be left at room temperature for a max of about ten hours, but only six to eight is recommended. Take that formula! You can find a TON of great information at Kelly Mom. Pretty much every BF question that I have typed into Google has lead me back to this site. I highly recommend it for any mother who is or is considering breastfeeding.

So, what to do with it once you have pumped? If you don't plan on using the pumped milk within a week, it needs to be frozen. There are several options. My first experience was with Storage Bags. I mainly used these because I had them on hand. I had received several samples throughout pregnancy. Initially, I loved them. Labeling was very easy. When frozen flat, storage was very easy. The only issue I had was how much to put in each bag. The frugal part of me wanted to fill it to the brim to get my money's worth. But the practical side knew that I wouldn't always need to thaw out eight ounces at a time. And I was not about to waste ANY of my liquid gold. And yes, I have cried over spilling it. Three times, actually.

I was fine with using the bags until a disaster occurred. I was thawing out a bag to make a bottle and I noticed the water was getting cloudy. Upon inspection, I noticed the bag had a hole! Cuss words were said. That was it for the bags. I had also received some ideas and info from friends on other storage options. One of the ideas that I liked the best was freezing breastmilk in ice cube trays: Boob Cubes. This sounded like a great plan for a few reasons. One, all I needed were a couple ice cube trays and some Ziploc freezer bags. Much more cost effective than the single use, over priced storage bags. Secondly, each cube is roughly one ounce. Perfect for thawing only the exact amount needed. In theory, it was fool proof. 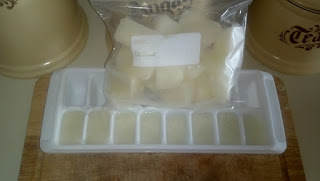 Once I gathered the supplies and tried it out, it did work, but there are a few minor details. I usually have to add an additional cube to make up for the variance. For example, four cubes usually winds up being only 3.5 ounces. Not a big deal; just add an extra cube. The trickiest part is thawing. The cubes take up more space than liquid. Duh. So, four one-ounce cubes don't fit into my four ounce Avent bottles. If I want to thaw quickly, I have to use the nine ounce bottle for them all to fit at once. And since there is a lot of empty air space once the cubes are in the bottle, it takes a little longer to thaw out than storage bags. This isn't such a big deal for bottles that will be prepared and sent to daycare. But if you are waiting for it to thaw for that feeding, it isn't the quickest process.

Once I tweaked those few minor details, the cubes seem to be working out. As of now, I keep about eight bottles ready to go in the fridge at all times. If I do pump some extra, I just pour it into the tray to freeze. My plan is to keep pumping fresh bottles and to keep the frozen as back up or extra. Once I go back to work, pumping is going to get even more tricky. I have already mapped out a couple times during the day that I can sneak out for a few minutes. For now, our system seems to be working well. My next planned post will be all about what happens after Haddie enjoys her meal. Stay tuned!

Posted by Rachel at 9:10 AM
Email ThisBlogThis!Share to TwitterShare to FacebookShare to Pinterest
Tags: Baby, Haddie

Rachel
Wife to Chris. Mama to Haddie. Teacher of Pre-K. Lover of food and crafts. Fan of college football.